As I mentioned in my last post I had myself a bit of a soup making day yesterday. I said I post the recipe for this lovely soup: 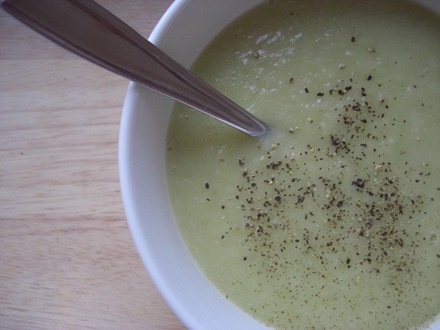 I used new potatoes and white beans in this soup in place of regular potatoes to reduce the amount of carbs as regular potatoes never seem to fill me up. This was so lovely for dinner on a cold and windy day!

Desert was a sliced peach and pear topped with some Almond Custard made with another recipe from The Holford Low GL Diet Cookbook. 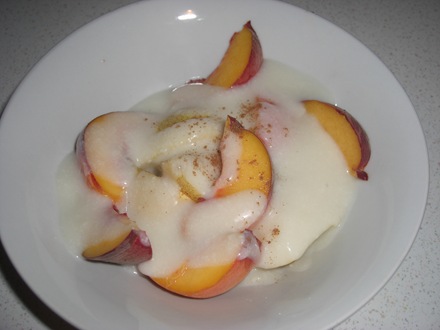 This worked wonderfully – so easy to make and very tasty! I also tried out a new to me ingredient – Xylitol. Its a naturally derived sugar alternative which like agave syrup doesn’t raise your blood sugar levels as much as regular sugar. It comes in granulated form. Has anyone used it before? What did you think?

I’m going to do a full post on the Glycemic Index and Glycemic Load really soon. This cookbook is full of some fantastic recipes and as they are all designed to balance sugar and carbs they are right up my street. They are also really simple and straightforward. My kind of cooking! The book itself is kind of laid out as a diet plan but I ignored that bit and just looked at the recipes ;-)

On to today’s eats! I made a lovely bowl of porridge using 1/2 cup Rude Health’s Fruity Date Porridge Mix made with 1/2 cup of soy milk and 1/2 cup of water. I topped it with some of my Pecan Plum Crunch Topping (2 chopped plums, 1 tablespoon of grape nuts cereal, 1 tablespoon of chopped pecans, cinnamon and agave syrup to taste) 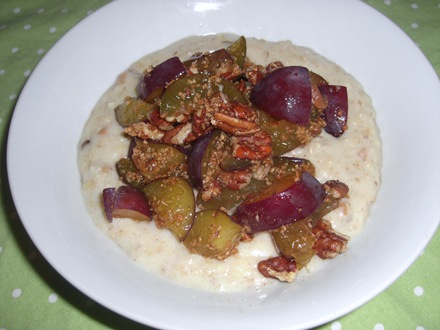 This was delicious and tasted very seasonal!

Mid morning I snacked on some hummus with carrot and raw cauliflower for dipping. 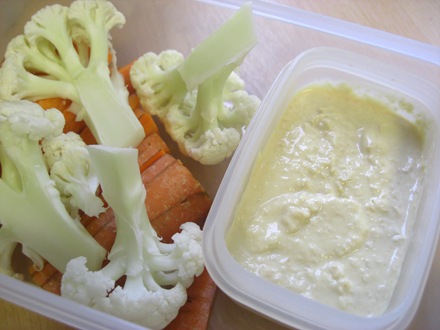 Who knew raw cauliflower would taste so good?

Lunch was a bowl of Chilli Bean Soup I also made yesterday:

Begin by frying the onion and garlic in the oil over a medium heat. Once softened add the carrots and pepper. Continue to fry the veggies for a few minutes then add the beans followed by the chopped tomatoes. Keep the empty tin from the tomatoes and fill up with hot water (be careful not to burn yourself like I did!) and add two tinfuls to the pan. Add your veggie stock cubes, spices and tomato puree. Let the soup simmer for ten minutes or until the veggies have softened then serve. 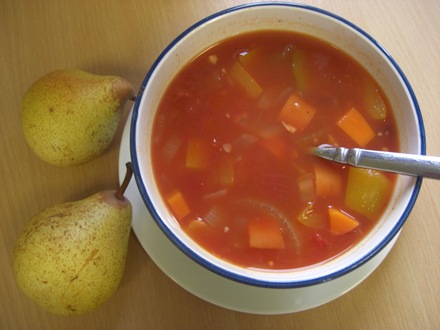 I also had a couple of juicy pears with my soup.

Before leaving work for the gym I drank a Beet It Shot. Tonight was my first spinning class in about two years! I started in the gym and did 30 minutes of HIITs on the cross trainer and step machine followed by some abs exercises then I went into the class. I really enjoyed it! It was a great workout and I think having the variety of a class as part of my routine is going to be great. I’m all booked in ready for next week!

For my dinner I mixed roast veggies from yesterday with some basil tofu and warmed it up in the microwave then served it on top of some spinach and cos lettuce. 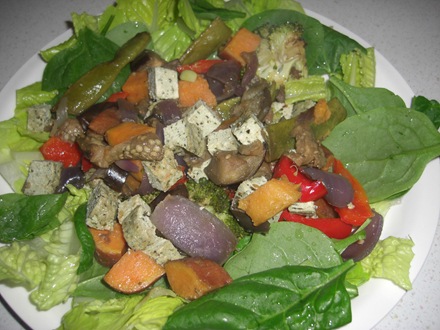 Desert was defrosted mixed berries with half a tub of cottage cheese, agave syrup and cinnamon. 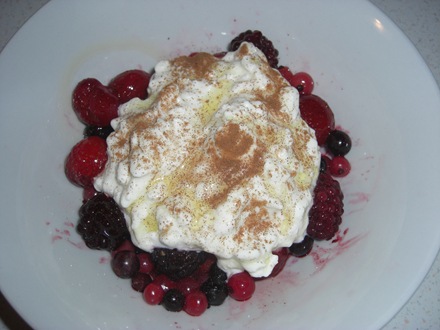 I can’t believe how dark and cold it has been today. I think I’ll be eating a lot of soup over the colder months! Now that I have my new blender I’m going to try and make some vegetable and fruit juices so that I’m still getting plenty of raw food in my diet. Over the summer I was eating lots of raw fruit and vegetables in salads and I feel great for it, I want to be able to keep it up as much as possible!

Do you make an effort to eat raw fruits and vegetables? What do you do in the winter to keep this up when salads don’t seem so appealing?