I bought a new car this weekend! I pick mine up tomorrow night. I got a great deal and I’m really excited! Its super economical and environmentally friendly and drives very well too :-)

Saturday morning I got up and decided that I wanted to get my run out of the way and done for the weekend instead of waiting until Sunday as I usually do. I fuelled up with an orange and 2 amazing medjool dates. I did 3 ‘laps’ of my hilly route for a total 7.02 miles in 1hr 9 minutes so a much slower pace than last week, but to be honest with those hills I was happy to have kept it under 10 min miles.

Post run breakfast was a good one – my tutti fruity smoothie with added romaine lettuce, spirulina, matcha green tea, maca and xanthan gum plus a tbsp of PB2 then topped with another tbsp of PB2 made into a sauce, goji berries and viva pure raw granola: 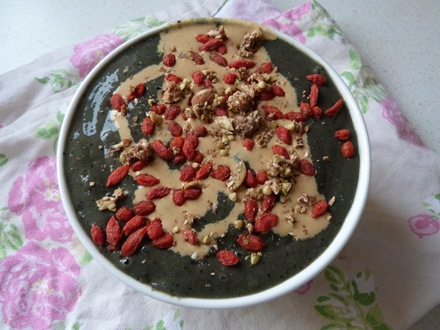 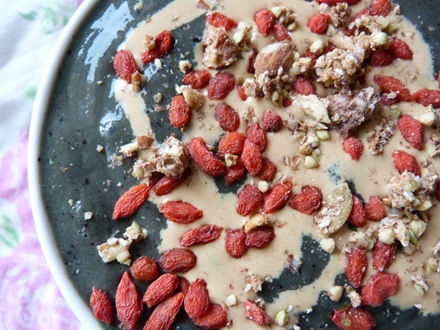 I had this bowl plus another half a bowl (the lettuce gives so much volume) and it was amazing. The PB2 is just divine, I’m thinking of ordering another couple of jars as I know the one I have will not last long! I’m also in love with the raw granola.

After car shopping I came home and had some miso and ginger soup, two rice cakes with tahini, a large chopped carrot, several chopped apples and a bowl of blueberries, blackberries and strawberries. A little later I made a wonderful green juice: 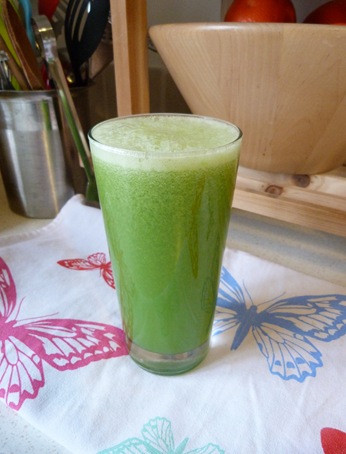 This contained pear, broccoli, cucumber, celery, Japanese spinach and lemon, I really can’t get enough green juice at the moment!

Dinner was the other half of my spelt and veggie pizza with some raw radicchio and romaine. Then we decided to open a lovely bottle of red. I had a large glass of this wine and my final two booja booja truffles: 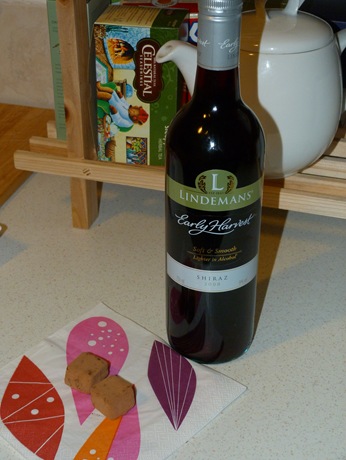 This morning I decided to make use of two of the three near empty nut butter jars I’ve been saving with berry oats in a jar. I made some porridge on the stove top with 1/2 cup of rude health fruity date mix and 1 1/2 cups of water. I added some mixed frozen berries and brown rice syrup and poured into my nut butter jars then topped with a fresh strawberry: 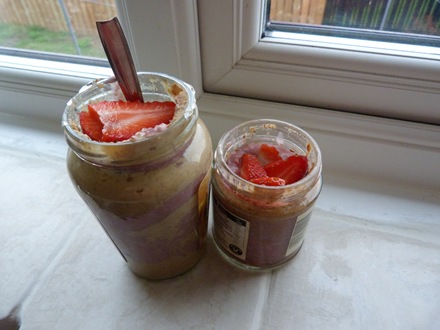 Check out the peanut butter on the side of that jar – nom! I also opened some raspberry coffee I got at Christmas and oh my god it was just amazing! 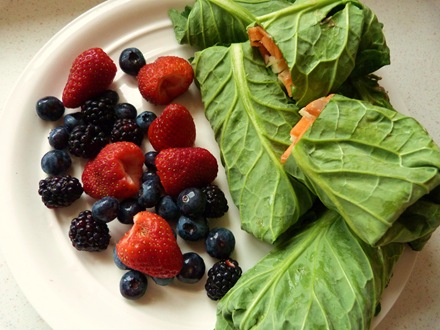 These were delicious! I’m enjoying eating more raw foods after reading about the benefits in Crazy Sexy Diet – raw wraps are such an easy way to do that. I also think I finally got the hang of wrapping them up so they don’t fall apart! During the afternoon I snacked on a few more pink lady apples and made myself another tasty green juice with apple, romaine, Japanese spinach, celery, ginger and lemon.

Dinner was a blogger inspired creation – I had seen this recipe for butternut squash cheesy sauce on Oh She Glows and knew I needed to try and make my own version:

Add all of the ingredients to a food processor and blend into a sauce. Add more milk for a thinner consistency (this thickens up in the fridge so bear that in mind) or more nutritional yeast for a more cheesy taste. This sauce could easily be used as either a pasta sauce, salad dressing or if left thicker, then a tasty dip.

I served mine with some brown rice and vegetable penne, courgette, steamed tender stem broccoli and radicchio plus nutritional yeast flakes and fresh basil on top: 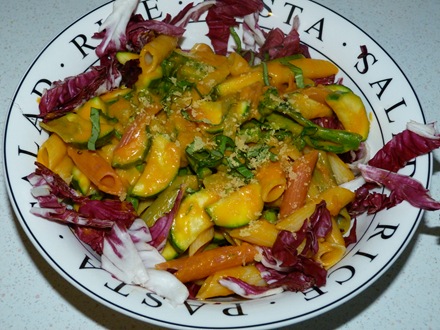 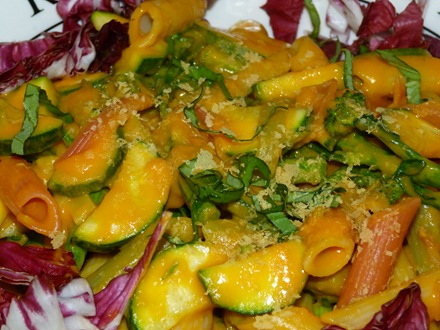 This is sweet, cheesy and garlicky and oh so good for you! I think I might try it on some raw veggie noodles too. Utterly delicious!

That’s not all I’ve been busy making in the kitchen! Friday I used some of the delicious medjool dates I picked up from my favourite green grocer to make two great recipes. No 1. was Choosing Raw Lemon Kissed Cashew Hemp Bars: 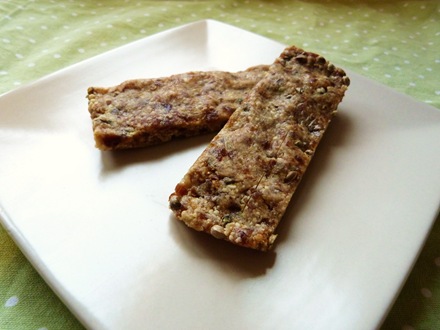 I used half the quantities in the recipe to give me 4 large bars. Can’t wait to eat these as pre gym snacks! I also made some Raw Vegan Chocolate Brownie Bars: 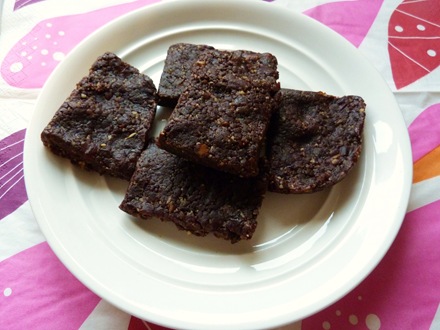 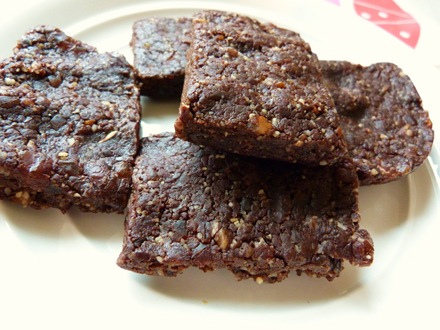 To make these I blended 1/2 heaping cup of dates with 1/2 cup of mixed walnuts and brazil nuts, 1 tsp of vanilla extract and 2 tbsp of raw cacao powder in my food processor then pressed the mixture into the bottom of a lunch box and froze until firm then sliced into squares. Holy yum!

I also had several ripe bananas to use up. I couldn’t decide if I should make some banana black bean brownies, muffins, cookies or banana bread. In the end, with help from twitter pals, I decided to go with the banana bread, and I’m sure glad I did! I made quite a few adaptations to a Veganomicon recipe and luckily they all worked very well:

Pre heat the oven to gas mark 4 / 180c and grease a standard size loaf tin. Mash the bananas well, then add the apple sauce, oil, xylitol and barley malt syrup and combine well. Add the spelt flour, coconut flour, desiccated coconut, bicarbonate of soda, salt and cinnamon and mix until just combined. Transfer to prepared tin and top with a good sprinkle of desiccated coconut. Bake for 45 – 50 minutes until golden brown (I checked mine at 45 minutes and it was over browning on the top but not cooked in the middle so I would advise covering the top with foil after 30 minutes). A knife should come out clean. Leave to cool and devour! 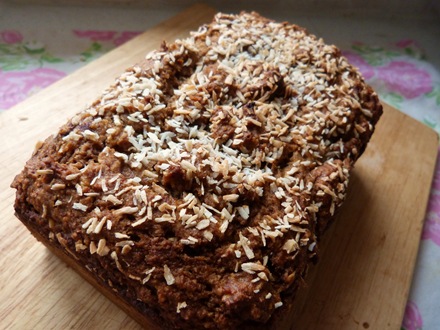 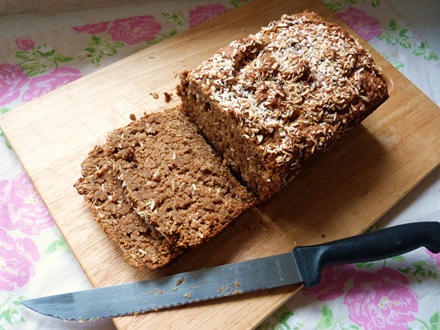 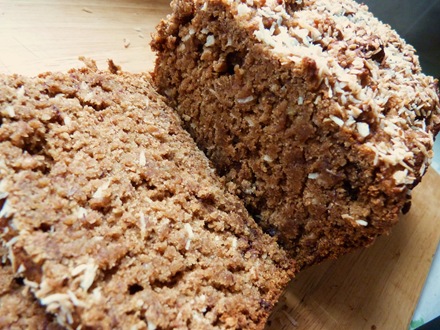 My parents and James had a few slices of this and it went down extremely well! I had a slice of for dessert and it was absolutely heavenly. Moist, bananary coconuty yumminess!

So I’ve had a pretty awesome weekend with getting sorted with my new car and all this cooking! Although I’ve had a good one I’ve been so saddened with what has happened in Japan, it reminds you of what’s important in life at the end of the day doesn’t it? My heart goes out to everyone that’s been affected.

What’s your favourite flavour loaf or bread? My coconut banana bread tasted amazing but I also love gingerbread and my Carrot, Date and Walnut Loaf.

Hope you’ve all had a great weekend and have a good week ahead!