Vegan Mofo 2011–Round up of recipes and posts + Pumpkin and Spinach Curry!

Hope your all enjoying Halloween! I have a yummy pumpkin recipe coming up in a moment, but first Vegan Mofo!

Vegan Mofo is coming to an end for this year, I’ve tried to post as much as possible on the theme of cheap and affordable vegan recipes – here’s my collection!

I also did a couple of themed posts including:

The Weekend Cook Up Session

I thought I’d finish up with a lovely recipe I made over the weekend using some super cheap seasonal ingredients: Pumpkin & Spinach Curry! 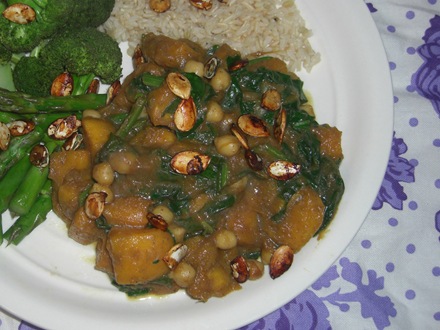 I love curries but I used to be put off making them because a lot of recipes have a huge list of different spices or fresh chillies. I eventually discovered a nice simple blend of kitchen cupboard spices that I use as a base for all my curries – garlic, ginger, garam masala, ground cumin and ground coriander. Some times I add other spices depending on the flavour but I’ve found that this simple blend works really well – its probably not very authentic, but it tastes good! I also made use of a £1 pumpkin and a 50p bunch of spinach for this recipe and along with using dried and cooked chickpeas, this is super cheap and tasty!

Begin by roasting the pumpkin or squash and setting aside. Mince the garlic and ginger and fry in a little oil (I used coconut oil) in a medium hot wok or frying pan. Add the spices and continue to fry, taking care not to burn, until they become fragrant. Add the roast pumpkin and stir well to coat with the spices. Add the chickpeas and coconut milk and reduce heat to a simmer. Add the chopped spinach a handful at a time and stir into the curry until its wilted down. Taste and add soy sauce / maple syrup as desired. Serve! 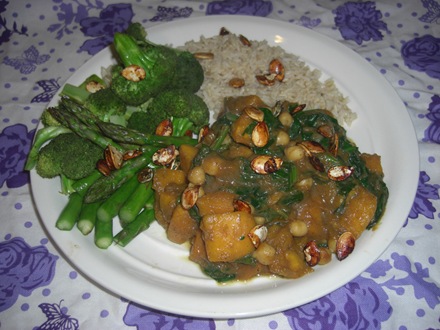 I served mine with some simple brown rice and broccoli and asparagus roast in coconut oil, plus some shoyu roasted squash seeds. It was delicious, and I have to say the maple syrup makes this extra nom-i-lious!

Are you doing anything for Halloween this year? I’m enjoying a pumpkin smoothie right now! Eating lots of pumpkin is definitely my favourite way to celebrate Halloween.

Have you enjoyed any particularly tasty vegan food this month?