Hi folks, hope your enjoying a blissful weekend! So far mine has been a good one indeed. There has been coffee…

…and an outdoor run and get this, with James! He decided to come out with me this morning and run a couple of loops around the block. Why is it that some one that doesn’t do a lot of exercise other than walking can run way faster than me? Damn those long legs of his ;-) He’s definitely a born sprinter. He hasn’t ran with me in the past as he has problems with his knees but we are thinking if he builds up slowly he might be ok. I continued on after that and did perhaps 3.5 – 4.5 miles – not sure what time as I was sans Garmin but it was just good to be running outside! Afterwards I came home and did this 30 minute yoga power flow from You Tube, so many chaturangas!

I have to say I feel like I’ve out done myself this weekend with the eats, I’ve made some delicious stuff! It all started on Friday evening when I made a Thai Green Soya Bean Noodle Bowl. I’ve made this a couple of times over the last few months and it is quickly becoming my favourite meal! I though it was about time I shared the recipe properly:

In a big wok or frying pan, gently fry off the ginger and curry paste in a little oil (I used coconut oil) over a medium heat. Once the paste has become fragrant (about 2 minutes) add the coconut milk and stir to combine. Add your noodles to the pan (if your using the ramen noodles or other dried noodles) and add some hot water from the kettle – just enough to cover the noodles, and simmer until the noodles are cooked. Add the sachet of soya sauce from the ramen noodle pack (or add a tbsp of soy sauce) and stir before adding the soya beans. Add your squash (and noodles if using pre cooked ones) and then pile the shredded greens on top. Allow the greens to wilt a bit in the heat then stir them into the broth which should be fairly thick. Once the greens are tender serve in a large bowl or ladle out into two regular size bowls: 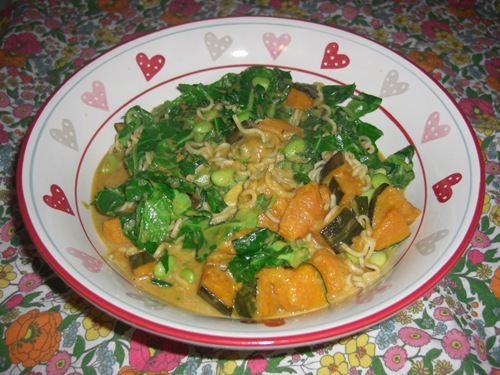 Seriously this is so so good, in fact it could be a contender for my favourite meal ever especially when made with the full fat coconut milk. Its also very quick to make if you have the squash roasted and ready to go and you could probably just add the beans frozen straight into the pan and just simmer a little longer. Absolutely delish!

For breakfast yesterday I decided to make use of the coconut milk leftover from the noodle bowl by following this method for making acai cultured coconut yoghurt! I had a sample of acai powder from an iHerb order so thought I would give it ago after making my own very simple coconut yoghurt a couple of weeks ago (just by refrigerating full fat coconut milk). I had some with blueberries, buckwheaties, pecans and maple syrup: 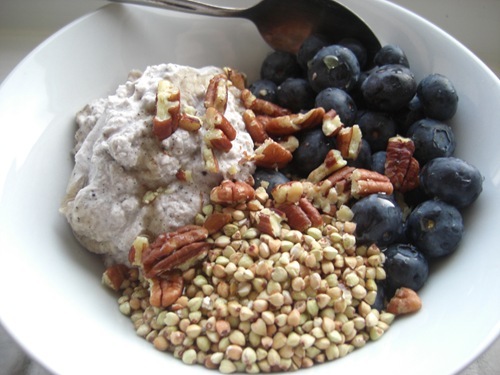 It was wonderful! I think if I made this again I would leave it out of the fridge somewhere warm overnight so it would ferment a bit more to develop more yoghurt like tang.

Lunch yesterday was a simple but really nice salad with spinach, romaine, red pepper, roast kabocha a sprinkle of fresh parsley and some tahini dressing: 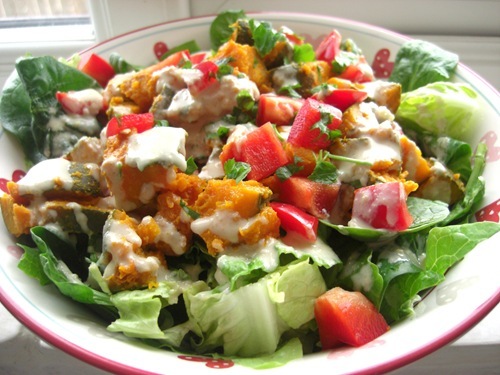 I made the dressing really quickly in a jar by mixing tahini with lemon juice, apple cider vinegar, garlic, sweet white miso and water so I have enough for a few meals. I added some to another special meal I made this weekend, raw curried cauliflower with herbed socca and roast purple sprouting broccoli: 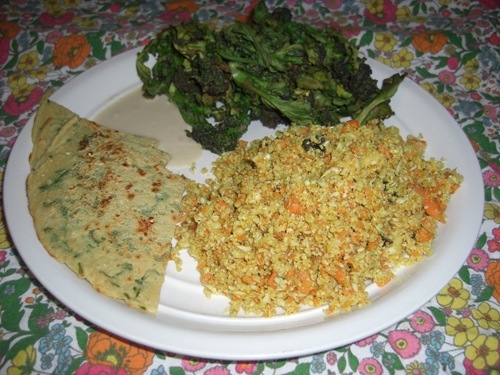 I’d been wanting to try the raw cauliflower ever since I saw this recipe on Some Like It Raw and it didn’t disappoint! I made a few amendments adding some coconut and a few chopped dried unsulphured apricots to the mix instead of the honey. For the spices I used turmeric, garam masala and cumin. It was well nice, and the socca turned out brilliantly too, especially dipped in that tahini dressing :-) 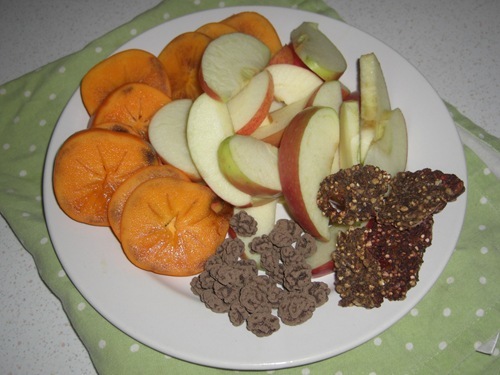 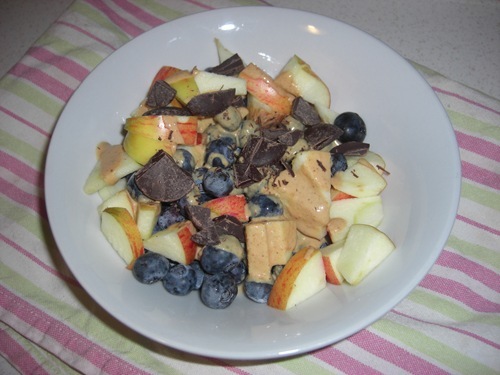 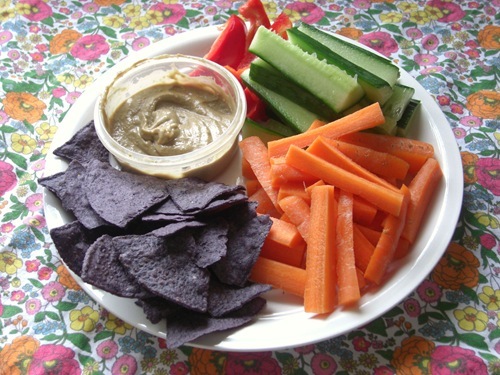 Veggies, blue corn chips and sunflower butter and miso dipping sauce (the chips dipped in the sauce, so good!)

Of course there has also been green juices and green smoothies consumed too! Yesterday we took a quick trip into town to pick up a couple of things: 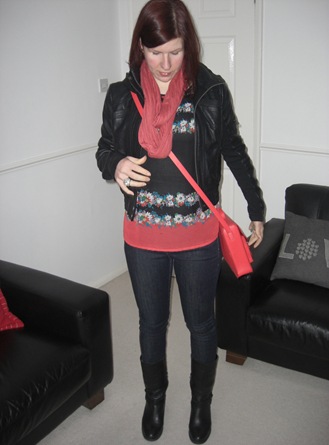 After town I called into a tattooist to discuss my ideas for my tattoo! Getting a half sleeve tattoo is on my wish list for 2012 and I want to make sure I have it done well before the summer as I want to show it off! I have another appointment to go in next weekend and finalise my design and arrange a date for my first sitting. Excited would be an understatement! Other than that I’ve been cooking up stuff again (including a great recipe I’ll share tomorrow), watching Family Guy Star Wars, painting my toe nails pink and reading Eat Pray Love. Good times!

How has your weekend been? What would you say is your current favourite meal? My favourite foods tend to change depending on the season and that Thai Green Curry is just everything I want in a meal right now!