Party in my kitchen

Happy Sunday everyone! Hope your all having a great day, Sunday’s are the best aren’t they :-) I’ve had a really great weekend just so chilled out and relaxed. This morning I got in a great workout at the gym. I hadn’t been looking forward to running on the treadmill (and although it was bright, it was freezing outside!) so I made up a really simple relaxed treadmill workout:

This was a great little run getting in 5k in just under 27 minutes. The regular speed changes stopped me getting bored and the speeds I used challenged me a bit, but left more than enough energy for my 15 min bike and 45 min Kettlebell class afterwards.

Yesterday I didn’t quite end up getting my intended lie in but I did have my lazy breakfast! Usually I know what I’m going to have for breakfast before I get up, but yesterday I decided to just see what I fancied. I really wanted something a bit bready that I could smother in nut butter but we don’t buy bread very often. Instead I decided to make a fat socca bread! I mixed half a cup of gram flour with half a cup of water, cinnamon, vanilla extract and a touch of stevia then fried the batter in coconut oil in my small frying pan. When it was cooked on both sides I topped it with with cashew butter, fresh blueberries and lots of maple syrup: 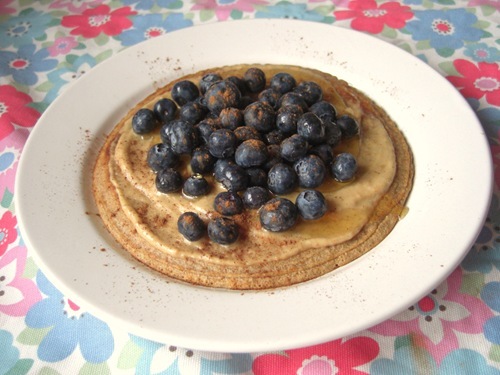 Perfection! This was just what I had been craving and was absolutely delicious. I decided to stick with the breakfast theme later in the day and made some oats in a jar for a snack after returning home from seeing friends and family: 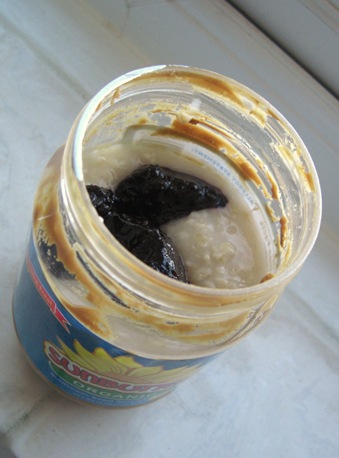 I needed warming up as we’d been out for a walk and I couldn’t think of anything better than oats! I filled a near empty sunflower seed butter jar with oats cooked with water in the microwave and a heaping tbsp of Clearspring naturally sweetened blueberry jam. 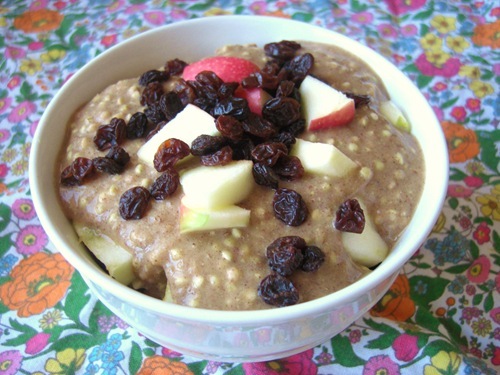 Yum! I enjoyed this with an Indian Chai tea with coconut milk, delish!

Other tasty bits and pieces this weekend include my usual weekend green juices, however as I was going out I didn’t think just juice would hold me over so taking inspiration from what I’ve been reading in Crazy Sexy Juices and Smoothies I made a smoothie with cucumber, celery, parsley, basil and orange blended with water, ice, maca powder and a little stevia to sweetened it up, all drank in a pretty mug of course: 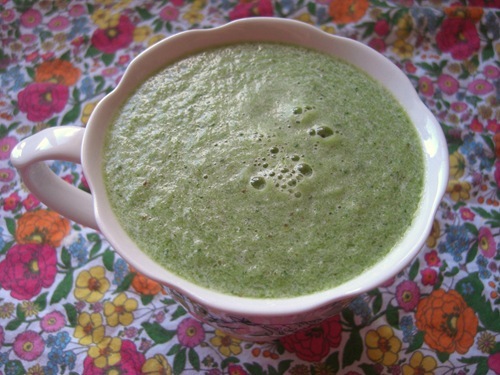 This tasted very refreshing and nourishing!

Last night’s dinner was based on my Roast Broccoli, Brussels and Chickpea and Cranberry Couscous recipe – I roasted some broccoli, and for the first time some savoy cabbage (delish by the way) in coconut oil and then topped with the chickpea and cranberries but made with quinoa instead of couscous: 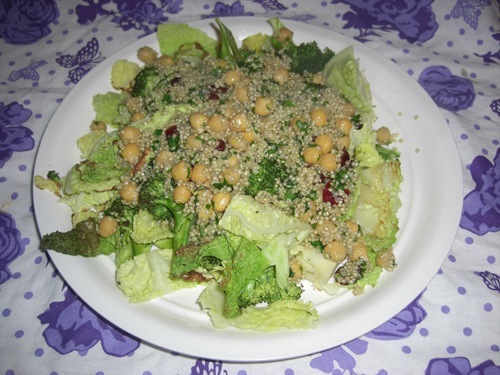 For dessert I tried one of my new chocolate almond puddings on top of frozen cherries with some peanut flour sauce swirled on top: 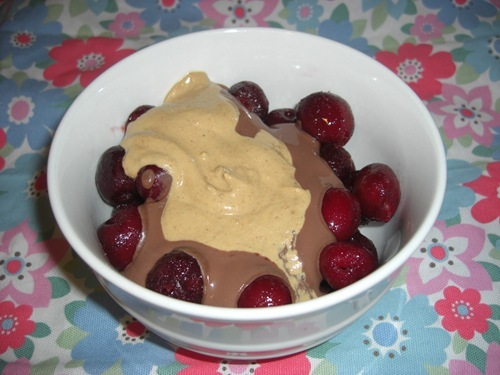 Heaven in my mouth!

This afternoon I’ve been having a party in my kitchen, I’ve had the radio blasting while I’ve been cooking and doing the laundry and I’ve even had a bit of a dance ;-) I’ve cooked up some brown rice for the week, made a special dish (which if it works will be incredible – will blog the recipe) and a giant pan of Lentil soup – based loosely on this recipe but I added some celery and left out the spinach because I didn’t have any. I had a huge bowl with some organic blue corn chips on the side for lunch: 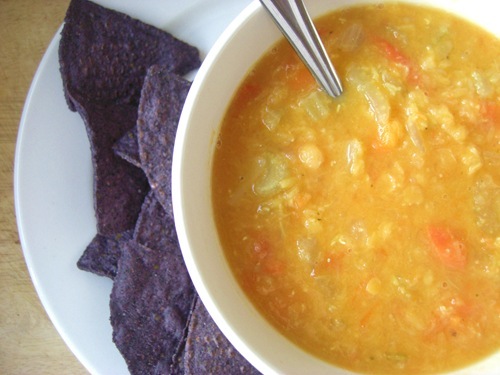 Proper lush, I dipped the chips in the soup for extra noms :-)

Please don’t tell me I’m the only one that dances in my kitchen? Hope you’ve had a wonderful weekend and have a great week ahead!