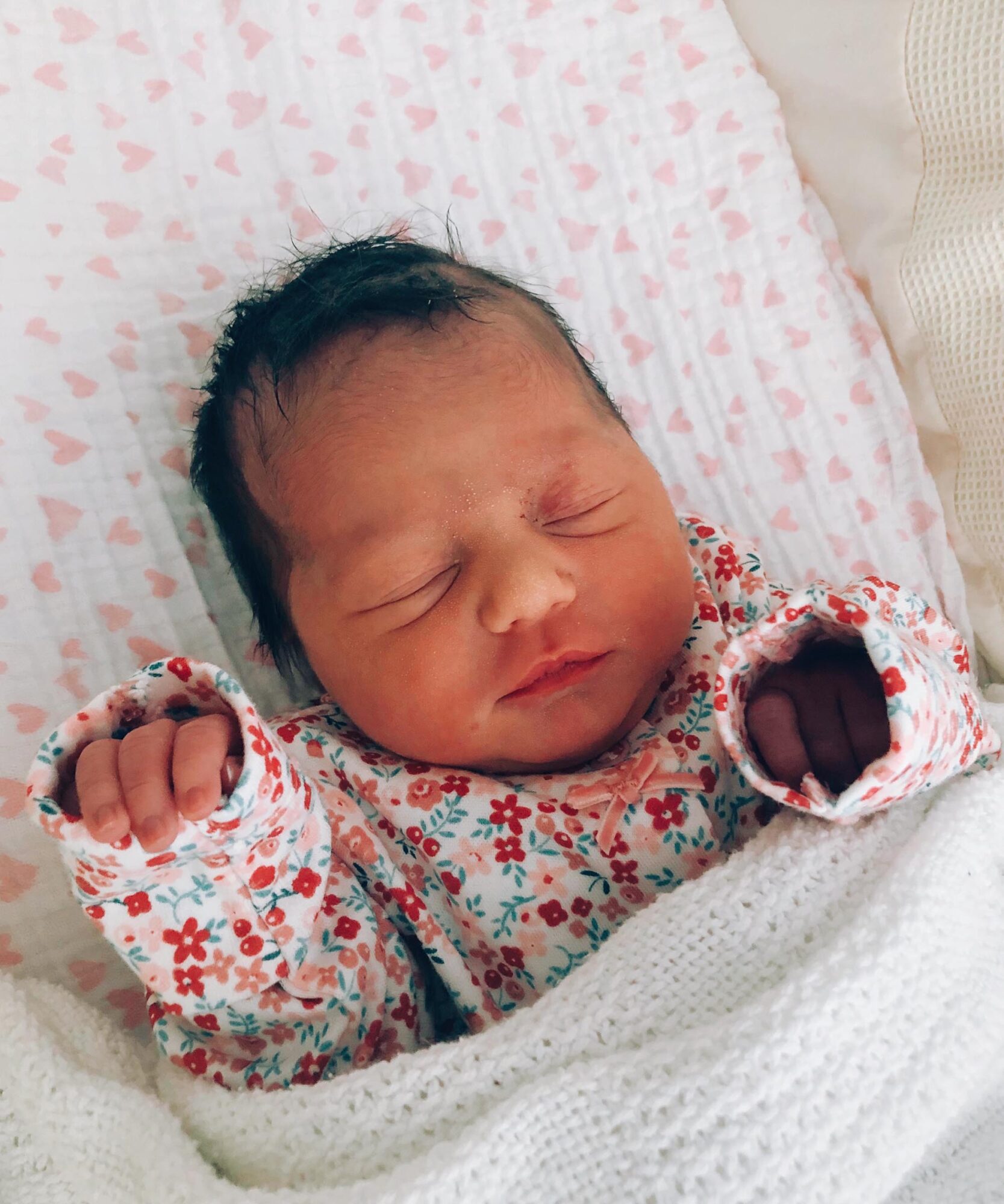 It’s been 3 weeks since I had Freya, and since I really enjoy looking back and reading Finley’s birth story, I thought it would be lovely to share Freya’s birth story here too!

This is a long one so get comfy!

I was 37 weeks +3 days, feeling good and just pleased I had hit full term after Fin being born early. I was also planning a home birth and had all the equipment ready to go should I go into labour, as well as having completed the Positive Birth Company Hypnobirthing Course which I found really helpful for preparing me for the natural birth I wanted.

I’d just finished off one last piece of client work that weekend, and done a blog post, and finally felt like I could relax a bit. In all honesty I thought we’d make it into January and closer to my due date of the 17th, but baby had other plans!

I woke up at around 12am on Monday 30th to go to the loo and found I’d bled quite a lot – much more than what I’d expect from a show. So I called the hospital and asked to come in and be checked out. I woke James to let him know what was happening but since I wasn’t contracting and Fin was asleep I decided to just drive myself in (it’s a 3 minute car journey as we live very close to the hospital). On the way in I called my parents so they’d be prepared in case it was things staring.

As I walked onto the ward I felt a small gush which I thought might be my waters but when I looked I’d actually bled more. Obviously I was getting more concerned at this point but could feel the baby moving nicely.

Almost as soon as I got on the bed to be examined on the assessment unit my contractions started. The Midwife examined me and her first thoughts were that the blood loss was reasonable as it seemed I was contracting quite fast, she was all up for sending me home for my home birth as I was 2cm dilated. But then an Obstetrician examined me and out popped a big blood clot, it was suggested at that point that it would be safer to stay in hospital rather than go home as a midwife would likely transfer me in with that kind of blood loss anyways.

I got settled in a delivery room, called James and my parents and got ready for labour!

Due to the bleeding they were keen for me to progress as quickly as possible. I was cannulated and needed to have constant monitoring in case the bleeding was my placenta misbehaving.

In the meantime James arrived and I set up all my hypnobirthing bits – my labour playlist, essential oils (DoTerra Serenity blend) and asked for the lights to be dimmed. I also asked to remain upright so sat on a birthing ball. I used my hypnobirthing breathing for the contractions which were coming every couple of minutes.

They broke my waters to help get things moving which were very bloody – again it was just a reminder that unfortunately as much as I would have loved one, a home birth would have just not been on the cards for me.

I stayed on the birth ball until it was time to be examined. They’d said they give me 2 hours to see how I might progress and then consider starting the drip.

Unfortunately when I was examined I was still only 2cm and my cervix wasn’t effaced and still quite posterior. After 2 hours of strong and steady contractions I was a bit gutted to say the least!

At this point they also tried to fit a clip on baby’s head for monitoring but it kept falling off. Plus the monitors around my tummy kept losing the heart beat and weren’t picking up my contractions which were mostly in my back. I think this really affected my ability to stay relaxed and in that oxytocin zone.

So the drip was started. This was something I’d really wanted to avoid, and thinking back I wish I’d asked for just another hour to see how I progressed on my own but at the time I was tired and just wanted to feel like I was progressing.

Gradually the contractions got stronger and I asked to lie on the bed on my side. I can’t remember why but I ended up sitting up on the bed so on my back but upright and things were really picking up. I’d lost track of time and the contractions were coming thick and fast. I was squeezing James hand for each one and using gas and air but I could feel myself struggling to manage.

I asked when I was next due to be examined and she said not for another 4 hours, well there was no way in hell I could manage another 4 hours of those! In my mind I was already thinking the only way I might get through this was with an epidural. I knew that the drip made things more uncomfortable and I was tired and just wanted some relief.

She examined me and I was only 4cm so I asked for an epidural without hesitation!

They said they’d call the anaesthetist and in the meantime try and get the clip on the baby’s head which they finally managed. In what felt like a short period of time things just ramped up massively. I felt like my body was being ripped in two. I was really struggling to breathe during my contractions and it felt like I was totally losing control. I actually said to James I felt scared.

On reflection this was definitely transition!

I tried using the mantra ‘my surges can not be bigger than me because they are me’ and that helped a little.

I was also starting to feel my contractions change, there was pressure at the top of my bump and then also in my bum. I was almost ready to doubt myself but I knew it’s possible to dilate very fast.

In the meantime there was a midwife shift change and a lovely new midwife came in just as I was starting to moo and scream!

I couldn’t physically sit on the bed anymore and flung myself onto the floor on all fours. The new midwife was amazing, she calmly said there was no time for an epidural (which I had definitely realised by now!) and to just go with my body.

I could feel the baby moving up and down the birth canal, then the ring of fire as I pushed her out. She was passed between my legs and finally Freya Rose was here! She was born while One Day Like This by Elbow played in the background at 8.17 in the morning. 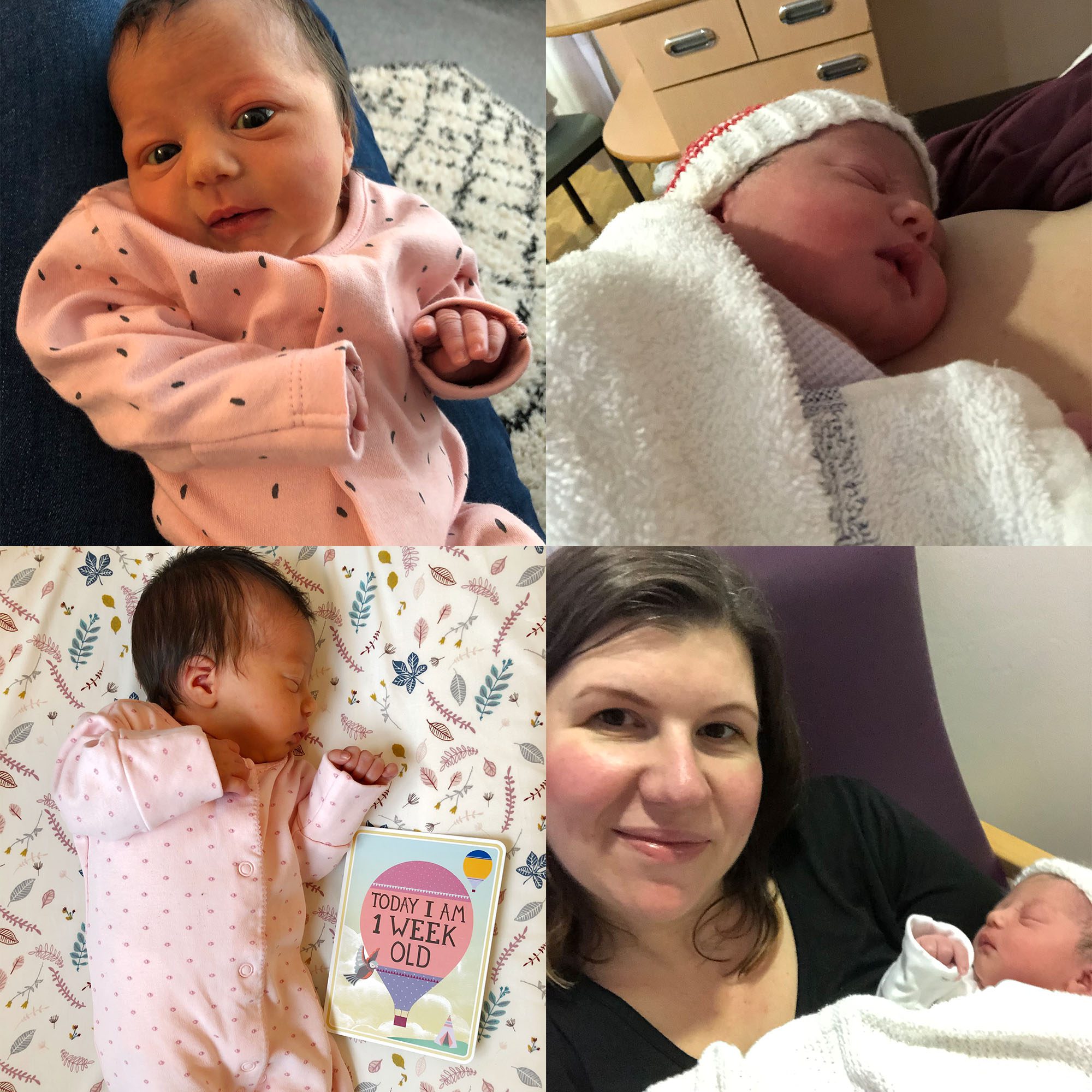 I got up on the bed and we had delayed cord clamping and lots of cuddles. James cut the cord too. The midwife told me I’d done amazingly well as Freya was in the back to back position the whole time and came out the wrong way round too.

We had lots of skin to skin cuddles and she latched on for a feed. Due to my bleeding I decided a managed third stage would be a good idea so had the injection to birth the placenta. I asked to have a look at it, it was huge!

I had two small internal vaginal tears stitched up and then more cuddle time before having a shower and moving to the postnatal ward.

Looking back, obviously things did not go as planned but I had been holding the whole home birth thing very lightly as I know how many factors can impact it. I don’t feel especially sad I didn’t have one, more I just feel like it’s been one of those things – there’s no doubt that the bleeding I had would have ruled out a home birth no matter what anyone could have done so there’s no point in feeling bad about it! I think it would have been worse had I laboured at home and then had to have been transferred in.

Instead I feel really proud of getting through that experience, especially just on gas and air. I do feel I have a pretty decent pain threshold but the pain I felt in Freya’s labour was unlike anything else. It was the most powerful thing I’ve ever felt.

So while there are things I would change if I could go back, I feel like Freya’s birth was empowering, I felt like I knew what was happening and was able to support myself with the hypnobirthing techniques and knowledge.

She’s now 3 weeks old and we are just besotted with her, she’s absolutely perfect!

We ended up having to go back in hospital as she had jaundice that needed phototherapy treatment (we had 3 of 4 risk factors for jaundice requiring treatment – born before 38 weeks, exclusively breast fed and a sibling who also had jaundice, I definitely seem to make jaundicy babies as Fin needed treatment too!). It was totally demoralising having to come back in, especially on day 4 when my hormones were all over the place, but obviously we needed to get her sorted.

Since then though things have been great, she’s breast feeding really well and gaining weight. She’s a dinky one, born weighing 6lb 9oz (she’s up to 7lb 7 now). She’s also sleeping ok, she’s still waking maybe every 2-3 hours with the odd 4 hour stretch and a few awake / cluster feeding sessions but because we’re bed sharing I’m not feeling that level of bone tired I did with Fin.

Finley adores her and has done well given all the changes alongside the holidays and me being in and out of hospital that first week. It’s so strange now I have two!

James is back at work and now I’m on my own and just starting to find my feet with solo school runs and finding a rhythm for our days together. I’m actually feeling really well in myself, my mood is generally good, I feel physically well and strong, my bleeding seems to be almost done. I haven’t quite the restful fourth trimester I really wanted so far, life goes on and stuff needs doing, but now the first couple of weeks are done and we’re more settled, I do feel like I have more time for rest.

So thank you for reading Freya’s birth story! I’d love to know if you have any thoughts, if you have two or more children how did you find the transition from one to two?