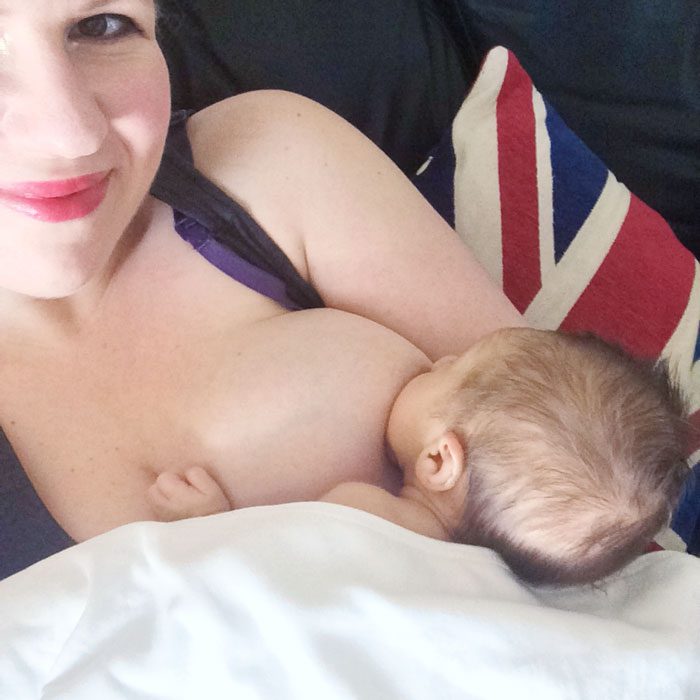 Breastfeeding is something I’ve always wanted to do when I had children. I’m not snobbish about it though, as much as I love breastfeeding I know many of my friends that have chosen to bottle feed their babies, all of which have turned out to be healthy, happy little kiddies, so please don’t mistake my love of breast feeding as passing judgement on those that don’t. There seems to be a lot of pressure on mamas to breast feed and a big feeling of failure for those that want to and can’t. At the end of the day a happy mama is just as key to the wellbeing of her baby as how he or she is fed in my opinion.

I know that breastfeeding isn’t a walk in the park and that a lot of new mamas can have difficulties. To be honest, I’m not sure how easy I would have found it had I not had that extended stay in hospital and therefore had access to some wonderful midwives and nurses that supported me to get breastfeeding established before I left hospital. Now that Finley’s heart problem is getting a little worse, there’s no guarantees that I’ll be able to continue for the long term.

As I’ve mentioned in previous blog posts, Finley had trouble with feeding in the first few days as he couldn’t latch on for longer than a couple of sucks. To make sure that he got what he needed and that my breasts were stimulated I hand expressed colostrum (which is the very rich ‘liquid gold’ you produce before your milk comes in) and fed that to him with a small syringe. We also had to give him formula top ups using a cup so that he didn’t get nipple / teat confusion from a bottle. I initially hated giving him formula, but he needed it to get strong enough to be able to suck at my breasts properly himself. I was a typical health coach and brought in my own organic formula though!

From about three days after he was born I’ve been feeding him myself and it’s been wonderful. I’m very lucky to have had no issues with sore nipples or latching on etc. Due to Finley’s heart problem and jaundice, I’ve had a lot more focus on ensuring that I am breastfeeding perfectly and have seen several lactation experts, all of whom have said I’ve been doing it right from the start thankfully. I’ve also done a lot of research myself to check I’m doing all I can to ensure Finley gains the weight he needs for his op.

Although I only have 8 weeks of breastfeeding experience, I feel like I’ve learned a heck of a lot, so here are a few tips / observations based on my own personal experience (remember I’m not a professional in this area so seek support if you need it before following any of these tips)…

One thing I didn’t fully appreciate before I had Fin and started breastfeeding him was the frequency of feeds, especially compared to bottle feeding. I knew I’d be up at night feeding him, but I hadn’t thought that would have been every 1-2 hours at times. As breastmilk is easily digested and babies tummies are small, they can need to be fed very frequently. Formula milk is not so easily digested so they can go longer between feeds. There’s also cluster feeding which is basically where they want to feed almost constantly. This can happen when they have a growth spurt to increase your milk supply as the amount of milk your breasts produce is based on supply and demand, i.e the more baby feeds the more milk you produce.

You’ll second guess yourself a lot

This might just be me, although I know a number of breastfeeding mamas who have also felt like this. Unlike bottle feeding, you can’t clearly see how much your baby is taking in which can lead to you questioning yourself a fair bit. I found myself doing a whole lot of googling! You’ll ask yourself how often you should switch breasts, if they are nursing for long enough, is it too frequent or not frequent enough etc. The best ways to tell if your feeding correctly is if your baby is doing lots of wet and dirty nappies and if they are otherwise healthy and gaining weight. Do be aware that the growth charts in the red health books are based on 1950’s sats of mostly bottle fed babies so if you are breast feeding don’t be too alarmed if your baby doesn’t follow them exactly. You can find growth charts for breastfed babies on the WHO website.

As I’ve said it can be hard to breastfeed so make sure you know where you can seek support. I’ve had fantastic support from my health visitor and some hospital staff. If you ever feel like you aren’t being supported by a medical professional in your choice to breastfeed seek advice and support from someone in your area such as an infant feeding coordinator or breastfeeding coordinator. I had a very hard time with doctors being extremely unhelpful and unsupportive of my breastfeeding. The La Leche League has local groups all over the country, start by finding a Facebook page for your local group. I discovered mine after a chance meeting with another breastfeeding mama in the mother and baby room at the shops! Also try and find a local breast feeding group or baby cafe. You can often get support from volunteers or professionals while you are there, as well as meeting other mamas and getting a slice of cake ;-)

Ok, so this may be another thing that is just me, but seriously I could’t give less shits about getting my tatas out. I think this is because they were touched and looked at by so many people in hospital I just stopped caring! In public I do try and be discreet, but remember you have a right to breastfeed. It is against the law (Equalities Act) to ask someone to leave because they are breastfeeding. James often gets a bit scared as if someone made a horrid comment or tried to ask me to leave, they would be the ones coming off the worse as I’d speak my mind put it that way! If you are a bit nervous about breastfeeding in public as some people are, you can get breastfeeding covers or breastfeeding tops that make it more discreet.

To increase your baby’s weight gain / your milk supply

I feel like I know a heck of a lot about this due to researching it extensively! As Finley’s heart is working so hard he burns more calories and therefore his weight gain can be slow which of course we don’t want. I feel these tips could be useful for anyone trying to increase their supply or get more weight on to their baby.

I’ve been very thankful to have my electric breast pump which has made expressing milk much easier for me. I was kindly sent the Ameda Purely Yours pump to try out. 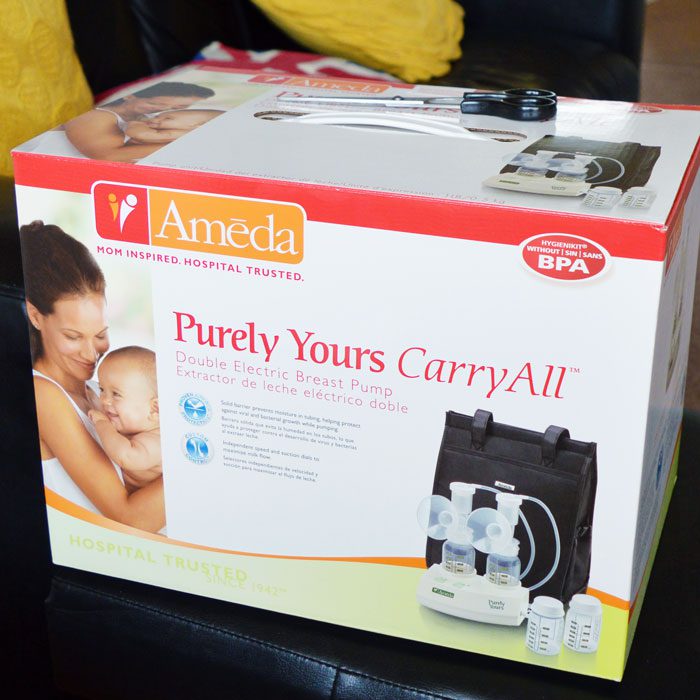 The pump allows you to pump both breasts at once, something that is super useful as I found that I could get more milk out when I pumped both breasts at the same time. You do look a little funny while you do it though, I felt like a cow being milked! The pump has adjustable dials for speed and suction so you can adjust them as you pump (although this is hard when you are using both hands to pump both breasts at once) to stimulate a let down where the milk literally squirts out of you. You do this by replicating how a baby would suck, light fast sucks to get the let down going followed by less frequent stronger sucks as they drink the milk. This Ameda pump is also a nice compact size, I’d definitely recommend it!

Electric breast pumps in general are pricey, but so worth it. You can find yourself spending a lot of time expressing and time is precious when you have a newborn so anything that makes it easier is worth it in my opinion! For the future, I am hoping that I’ll be able to breast feed Finley for at least a year so will be expressing milk so that he can be bottle fed it when in the care of others. I’ve also started freezing some of my milk for emergency use.

Right now, we are following a set plan to increase Finley’s weight gain which I’m pleased to say is working very well alongside his medication. Now he has his feeding tube in (as Finleys heart and lungs work harder he burns more calories and therefore needs supplemental feeding to gain weight) we are breast feeding more or less as normal, then I’m giving him top ups via his NG tube of high energy formula. I’m also expressing milk after as many feeds as I can to keep my supply up as Finley won’t be taking as much milk in as a normal baby, and of course I am still hoping to feed him post op. To be completely honest I was gutted when we had to start using formula top ups. I felt like I had failed somehow, and after his early arrival I had seen breastfeeding as a way of ‘making up’ for his early start in life. However I came to terms with the fact that the formula milk is not needed because my breast milk isn’t sufficient, rather that it is a more dense source of calories for him to take in which he needs right now.

Ultimately I’m finding breast feeding one of the most rewarding experiences of my life. It goes far beyond feeding Finley and extends to nourishing him and myself in so many other ways too. I hope that I’ll be able to resume exclusively breast feeding Finley after his operation, but until then I’m happy he is getting the benefits of some of my milk.

If you have children what was your feeding experience like? Did you breast, bottle or both? If you are yet to have kids, do you plan to breastfeed?