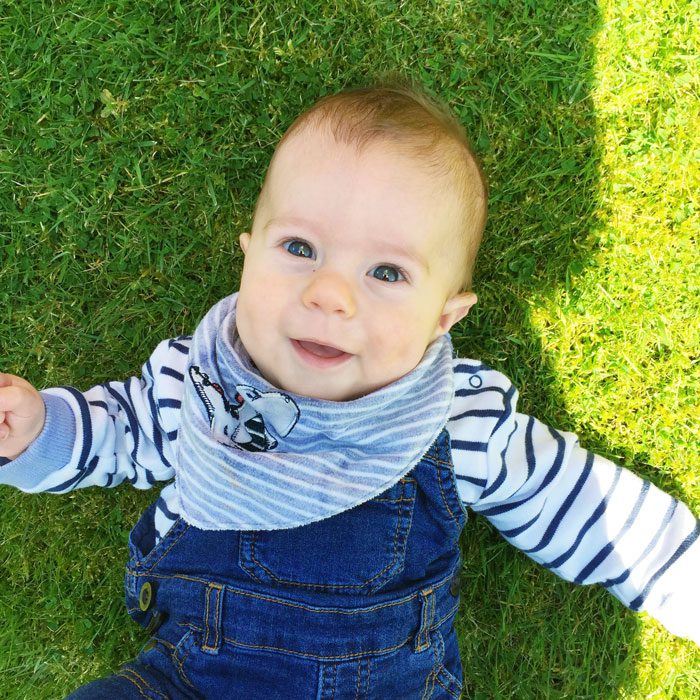 Each time it comes to writing these posts I get a little sad at how quickly time is passing. It’s true that these first few months are so precious! Yesterday Finley turned 8 months which is just incredible. He’s coming on so well and he’s just a pleasure!

We are so all over with this at the moment and the last couple of weeks we’ve had some hard nights where he just wouldn’t settle easily, I think, due to teething and having a cold. He still breast feeds a lot at night, and again I feel like we are at a place where we need to do something for us to get more sleep, but what I’m not so sure. I do feel that we both might benefit from him sleeping in his cot rather than in bed with me, although I will miss that closeness and connection that comes with bed sharing. Plus this article sums up how natural bed sharing is and why its a good idea from a biological perspective. There’s nothing like waking up to a smiley baby snuggled into you too! We have a holiday next month then we might have to try and make some small changes and see if we benefit.

He also seems to have regressed with naps and we are back to his 30 minute cat naps rather than longer naps so I’m wondering if it is some kind of developmental regression. 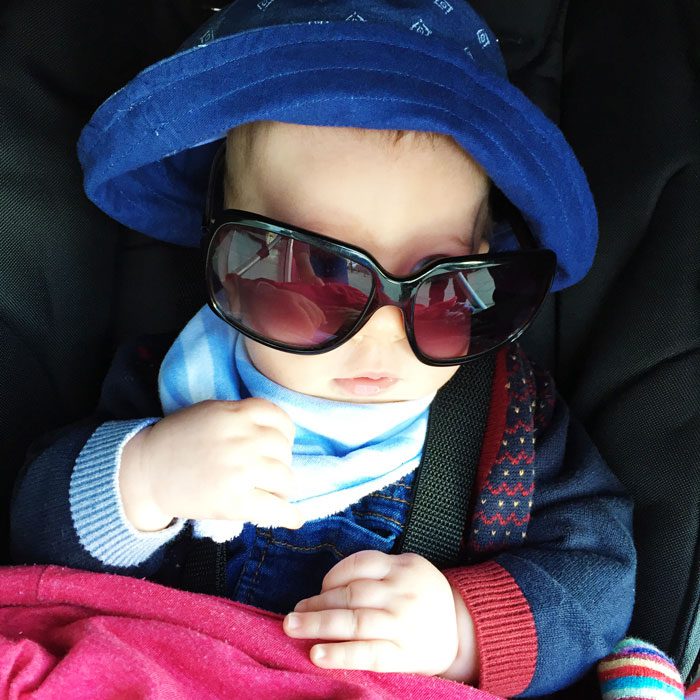 Some exciting things have been happening this last month, he’s pushing himself right up on his hands and getting into a crawling position, which is wonderful but a bit scary thinking he could be crawling soon! He’s sitting up completely unaided as of today, it’s like he’s suddenly found his balance. He’s also been experimenting with his pincer grip while feeding. He’s getting more vocal too, fingers crossed we’ll hear that mama or dada soon!

His weight has really improved too. Since we added in high calorie formula – 10 – 14oz on nursery days and then 2-6 oz on other days his weight gain has picked right up. He’s still incredibly small for his age though, and I still feel really paranoid about it. I constantly have to remind myself that he’s perfectly healthy as he his and if he’s meant to catch up he will. I think once he’s picked up a couple of percentiles so he’s closer to his birth percentile we will be able to stop the formula. Then again, if he’s naturally small, or small because he had a heart defect, then so be it.

Nursery continues to go well and now he’s taking a good 10 – 14 oz of high calorie formula when he’s there which is awesome and obviously great for his weight gain. I am a bit concerned at the fact that he’s had a cold almost constantly since he started, although I know that can be normal as they pick things up before they develop immunity to the different viruses that do the rounds. 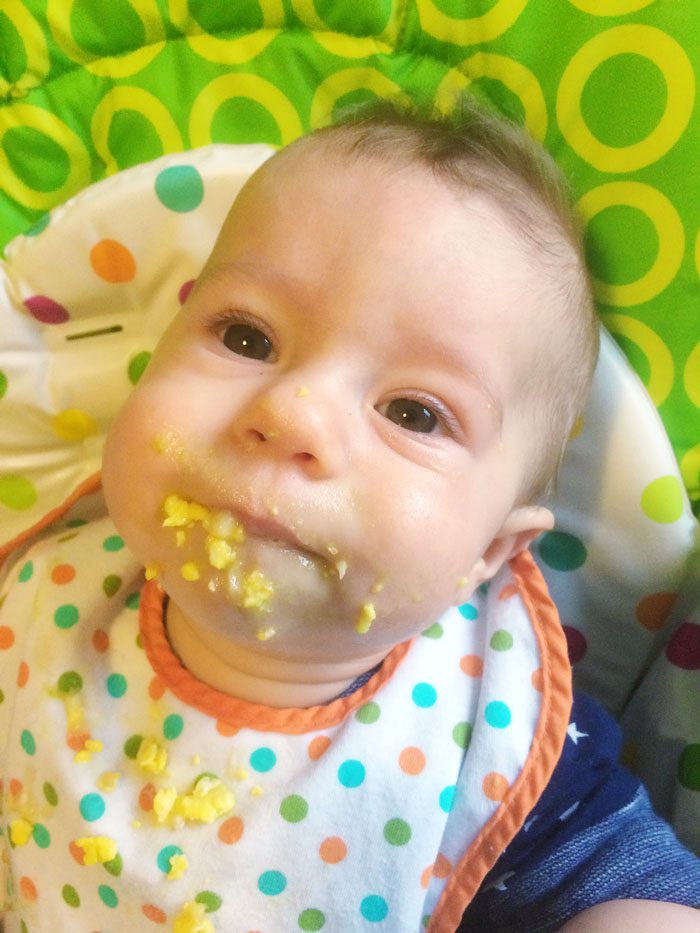 So much fun! I love this weaning stage. Finley has been on solids for two months now. I think I mentioned that I felt more comfortable doing a mix of purees and baby led style finger foods and that’s exactly what we’ve done.

When it comes to nutrition, I’ve had a big lesson in having to just go with the flow. Ideally I would have exclusively breast fed and done baby led weaning, avoiding diary and wheat products until he’s older (as they aren’t easily digested and can damage the gut) and gradually introducing foods in an order that protects his little digestive system. Obviously we had to introduce formula to get the weight on for his heart op, and now we have to use high calorie formula to support him to thrive. We also need to fat load his foods to add lots of calories, and what is high in calories? Full fat dairy. I’ve also used Ella’s Kitchen pouch meals which are organic for some added variety, and to be honest, some ease for me.

I think I’d put myself under a lot of pressure to feed him perfectly, but the reality is, you’ve got to just do your best. When I look at the positives nutritionally, I am still breast feeding most of the time, I choose organic and best quality and I make a lot of his meals (at least 90%) myself too.

So Finley is now on 3 meals a day, here are some typical meals he has:

To load calories into his meals I use:

Here are a few very rough ‘recipes’ I’ve been making which he loves:

Place the chicken carcass into a large pan with roughly chopped carrots and leeks. Cover with water and add the vinegar, bring to a boil and then reduce the heat to a low simmer. Leave to simmer as long as possible. Drain the liquid and set aside. Pick the bones out of what is left and add the very soft carrot and leeks to a blender along with the dark meat. Add some of the bone broth to blend. Pour into large ice cube trays and freeze. 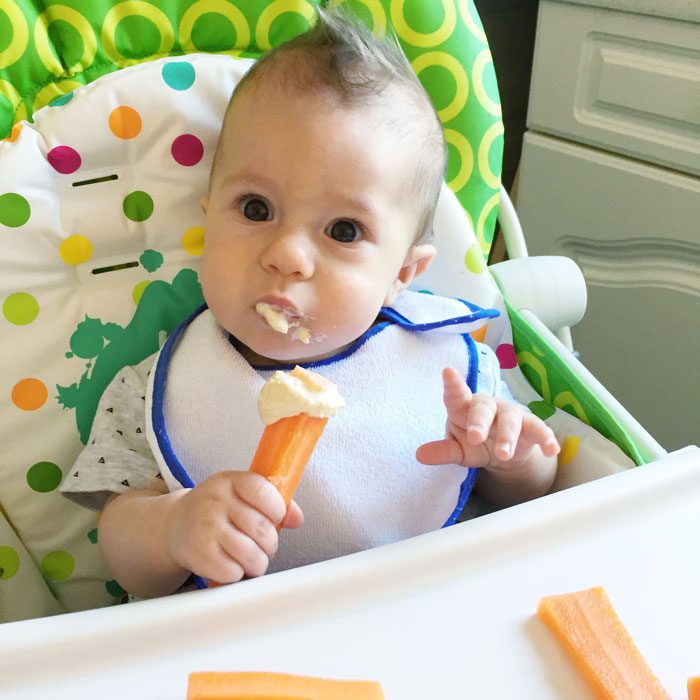 Drain chickpeas and add to a blender or food processor with everything else. Blend, adding extra virgin olive oil (or also adding a little water if needed) to get the hummus to a rich creamy consistency. 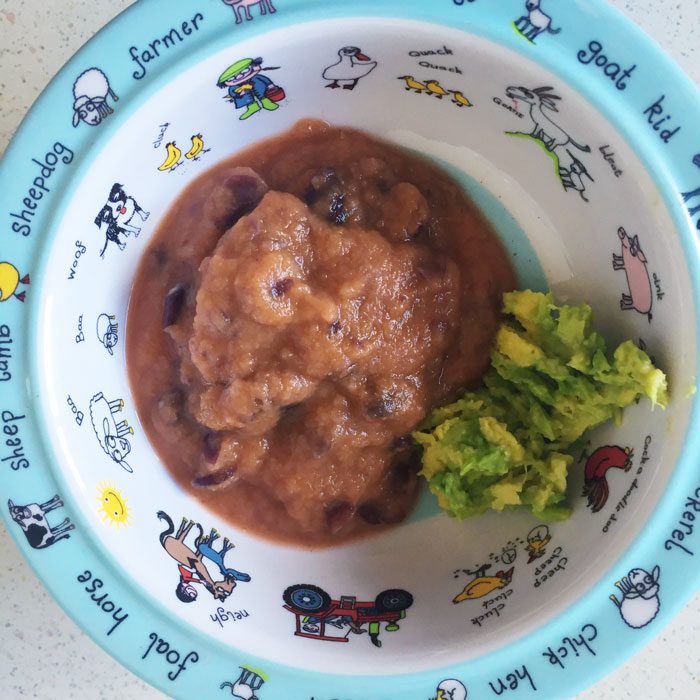 Add the drained beans to a pan over a medium heat with the ghee and cumin. As it warms up, mash the beans up with a spoon and add the carrot puree. Serve with avocado

Roughly chop carrots and steam. Puree with the coconut milk. 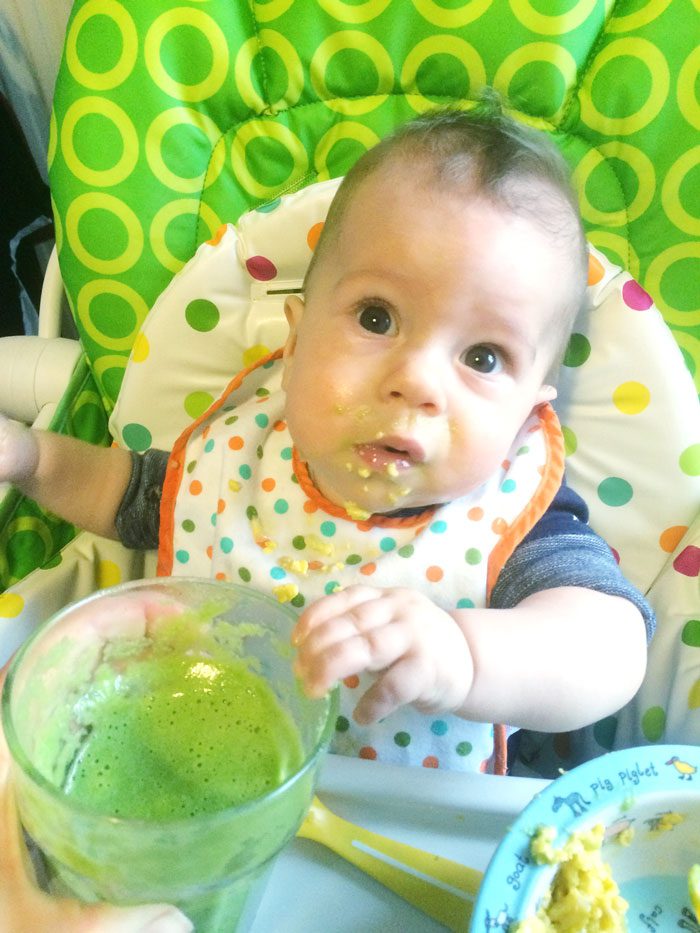 Blend it up, no liquid needed if serving with a spoon.

De-stone the fruit and add to a roasting pan with plenty of coconut oil. Roast fruit until soft and tender. Blend!

Soak the apricots in hot water for at least 6 hours. Drain and blend – can also add some coconut oil 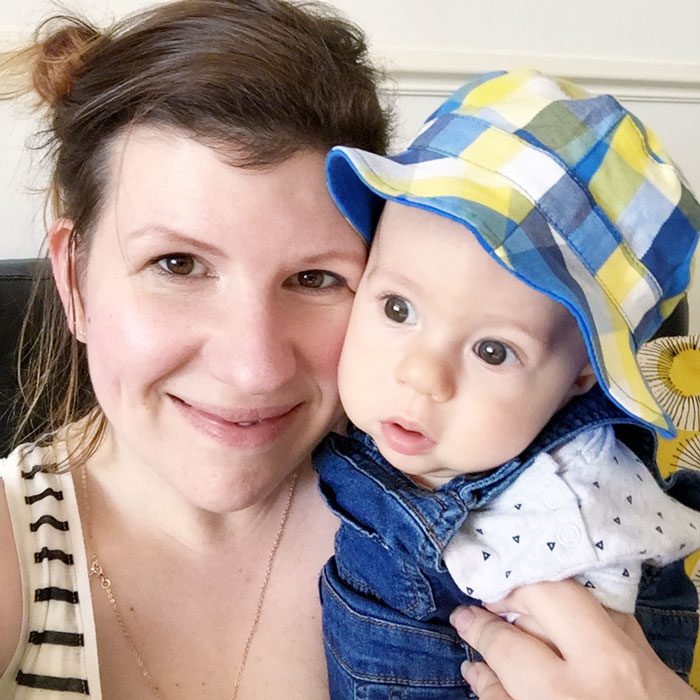 Now we often keep some of our dinner back to give him mashed up a bit. Today he’ll be having salmon, new potatoes with butter and broccoli trees to nibble on. He’s also just started using a slippy cup for a little water with meals. Feeding Finley as best I can is so much fun, I love how well he’s taking to his finger foods too!

If you have little ones what did you love to feed them? Did you ever feel pressure to be ‘perfect’ with their nutrition?