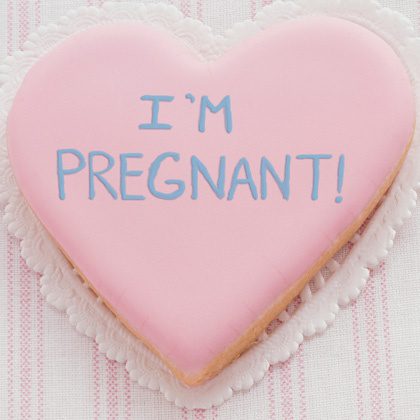 How I got pregnant

How I got pregnant

First of all I just have to say a huge thank you for all the comments, tweets, Facebook messages and emails I am absolutely blown away!

I’m sure you all know the facts of life ;-) but if you’ve been reading KHGS for a while you’ll know that me being pregnant would have came as rather a shock due to the issues I’ve been facing over the last two and a half years. To catch you up, after losing a lot of weight and then losing even more, I came off the pill and never got a period. We weren’t trying for a family back then, I just decided that I no longer wanted to be putting hormones into my body like that. As it happens that mix of stress on my body from being such a low weight (for me), over exercising and hormone suppressing effects of the pill meant that for the last two and a half years I’ve had no periods, haven’t ovulated and essentially, have been infertile.

I recognised that what I could be dealing with was Hypothalamic Amenorrhea (HA) so started to gain weight and reduce my exercise. I’ve gained well over 2 stone back and right now I’m almost exactly at the point between my lowest and highest weights. Gaining weight has not been easy at all, but I knew that this was an issue that needed to be sorted out, we would want to have children one day, but more importantly, I wanted to have a healthy body functioning as a woman’s should. That was more important to me than being slim. I tried weight gain, seed cycling and acupuncture with only marginal improvements and after two years I decided to go down a medical route. For the last 9 months I’ve been seeing a consultant at the hospital and have been for various tests. When every test had been done and other options exhausted, I made the decision to try medication that would make me ovulate.

At first it didn’t work and I had really started to face up to the idea that children might just not be on the cards for me. If you asked me what my biggest fear was a few years ago, infertility would have been top of the list, but it was something I had to possibly come to terms with. James and I discussed it and as much as we knew we would like children some day, we also believed that a life without children could be just as awesome. We are lucky to have some amazing role models like my aunt and uncle who don’t have kids but have a tremendously full life. When the medication eventually worked enough to give me my first period in over two years – I was over the moon, but my blood tests showed that I still hadn’t ovulated so I was only half way there. The next attempt didn’t work at all, and then at the start of the year I tried another round of the medication. Some of you will remember that I posted how happy I was that I had ovulated. I would have never dreamed that one ovulation would have been enough to get me pregnant!

After I had that positive ovulation blood test I was quietly awaiting a period. At the time I was experiencing cramps, extreme tiredness and sore swollen breasts so I just thought it was my period on it’s way. But in the back of my mind a little voice was telling me I could be pregnant. I ignored it until the day I should have started my period had past, and decided I might as well take a pregnancy test. I didn’t even tell James I was doing it, I just headed straight to the bathroom when I woke up one Wednesday morning and there it was, 2 little lines that would change my life forever. I could hardly believe it, how the hell could I get pregnant so quickly! I took another test to be sure as well.

I also went to the doctors and had another test done. I just couldn’t believe it. Although it was early days (I was guessing I was just over 4 weeks pregnant) we told my parents, James family and my best friends and for the last 3 weeks I’ve been on tender hooks just hoping that everything would be alright. As I’d been under the care of the consultant, it was arranged for me to have an early scan to check all was well. I was a nervous wreck before hand, for a baby I never realised I wanted right now, the idea of something going wrong was horrendous. But I needn’t have worried:

Straight away we saw our little peanut with her flickering heart. I cried my eyes out with relief. The scan put me at 8 weeks 3 days so a good week ahead of where I thought I was (I must have ovulated very early in January) and when you see a heart beat after 8 weeks the chance of something going wrong drops down to under 5% thankfully.

I wanted to spill the beans on the blog for a few reasons – firstly I thought it might start to become obvious something was up, my exercise has changed quite a lot because I’ve been too exhausted to do what I would usually be doing, early morning workouts are not happening and I’ve literally eaten no big green salads because that is definitely one food aversion I’ve been experiencing (along with coffee and plain chicken and fish, urgh!) I also felt uncomfortable with the idea of lying about things – which I would have had to do not to make the situation obvious. When it comes to my eats, as I said big salads have been out and all I’ve wanted to eat are ALL THE CARBS – crisps, cheese on toast, cereal and chocolate. I have managed to get in some balanced days and used them for WIAW, but they are becoming few and far between as feelings of nausea come and go. Plus it just didn’t feel right not sharing this with you guys!

When it comes to the M word, I am a lot happier that I am over 8 weeks and have seen the heart beat but I know that things can go wrong at any point in pregnancy. God forbid it does, but if anything happened I would share it here, I think I’ve been open and honest enough in the 4 years I’ve been blogging so why stop now. Oh and of course, James has been desperate to shout the news from the roof tops too!

Right now I’m 9 weeks and counting to the end of the first trimester. I’m still in shock to be honest, I know it might sound naive but I did not imagine that I would fall pregnant in just one ovulation, or we might have been a bit more careful! I am in awe at my body though, to fall pregnant and stay pregnant so quickly is amazing. I have been wondering why the medication worked that time round, perhaps because it had built up over time, or maybe because I had gained even more weight over Christmas. Either way I’m not complaining!

I tend to think it has been the result of a cumulative effect of weight gain, stress management, good nutrition and the medication that has done the trick. The medication might have helped me ovulate, but I’ve no doubt my healthy lifestyle has helped me get pregnant – and I guess James swimmers might have had something to do with that too ;-)

Naturally I will be posting about the pregnancy on KHGS to share my experiences and record my journey for my own benefit. However I know that it can get rather boring if you have no interest in pregnancy right now. I’m thinking I might try and keep pregnancy stuff to one post a week on a Friday, then if you aren’t interested in it you can skip it.

At the start of 2014 I had a feeling this was going to be a good year, I couldn’t have imagined it would be good in this way though! I can honestly say I’ve never been happier in my life, I can’t wait to meet this little miracle. Gaining weight, having more ‘fat’ days recently and even questioning my abilities as a healthy living blogger / coach has all been worth it for this.

Any pregnant ladies or mums out there have tips on dealing with early pregnancy anxiety?