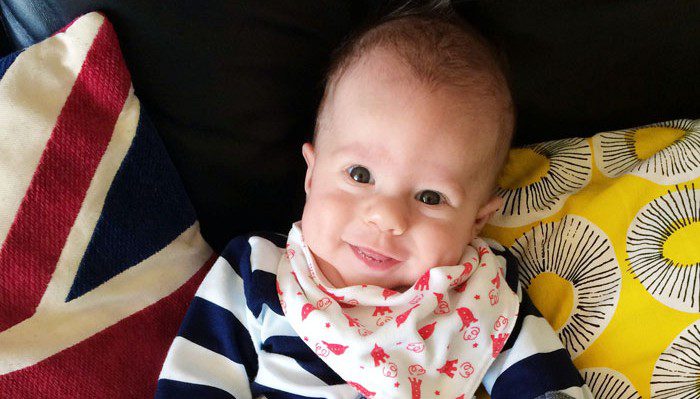 Being a Mama: Finley at 5 months

Being a Mama: Finley at 5 months 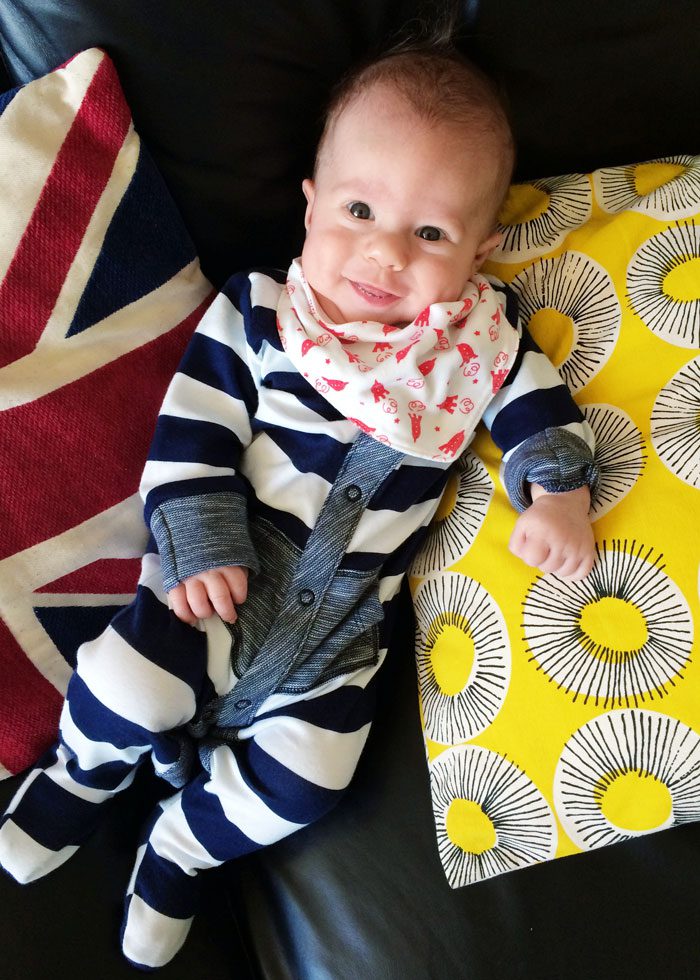 Finley turned 5 months old last week, where has the time gone? He’s coming on so amazingly well, and after those difficult first couple of months things are feeling more ‘normal’ around here.

For so long, every morning I’d wake up and it would be like ‘oh my god I have a baby!’ and nothing felt really normal. I don’t think his heart defect did anything to help that slightly surreal feeling either. This last month that has changed, and now everything just feels more like normality. A new kind of normality, but a wonderful one. At first I’d thought I was terrible for feeling like things weren’t normal, but after talking to friends I see I’m not alone. One friend said to me it was two years before she felt normal!

Finley is continuing to breast feed really well. I’m proud of us both for managing to continue it after his op, and now he’s been exclusively breast fed for over 10 weeks. His weight gain is ok, as in he’s following his percentile line, but he’s not gaining any extra catch up weight. I’ve talked about this with the health visitor and dietician and both are ok with that as he’s developing so well in himself. What has been exciting is starting to think about weaning! He can still be weaned at 6 months even though he was early as the age of weaning is about how long the baby’s gut has been exposed to milk rather than the baby’s due date. I had a wonderful chat with another health coach who has two kids and I’ve bought a couple of books more in line with my nutritional approach. I’ve also read a few articles on Paleo style weaning. Knowing what I do about gut health, I’ll be leaving diary and wheat until he’s much older and instead focusing on vegetables and fruit, eggs and meat, especially calorie dense foods to try and increase his weight. As Finley is so little, I’m not going with full baby led weaning but a mix of that and purees at least for the first few weeks. He’s actually already had something other than breast milk, some coconut oil which he’s licked off my fingers. He’s definitely ready for it as he’s almost face planting himself into my dinner! I’m still going to wait a few more weeks and then we’ll start properly. I can’t wait to see him take his first few bites! I’ve also been expressing milk to try and build up a freezer stash for when he starts nursery which is challenging while you are still breast feeding full time as I don’t have much left over. I did have a decent stash from when we were in hospital but our freezer broke this week and I lost the lot, gutted! 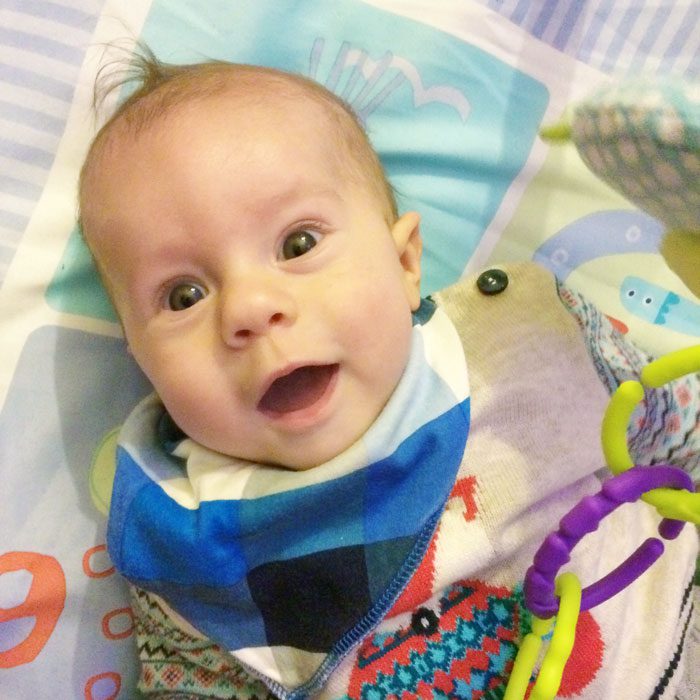 Almost as soon as I’d posted my last update on things he started to do loads! He’s fully grasping at toys and bringing them to his mouth, he’s rolling over and sitting up with only a little bit of support! Just the last few days he’s started to laugh properly as well. He’s such a smiley, cuddly baby, although he often likes to be held up on his feet so he can see everything that’s going on. He is also teething in a big way right now, he’s a dibble pot! I can see a couple of teeth starting to push through his bottom gums and he’s chewing everything he can get. At times his teething and developmental leaps make him a bit clingy and just wanting to be held, but as long as he’s in your arms he’s happy. He loves music and James and I often dance with him and sing songs to him. He also loves his baths and loves having his nappy off, although I have fallen foul of that a few times when I’ve ended up covered in pee!

Last week we started a Tiny Talker class which we both loved. Apparently these classes can help a baby to develop communication skills earlier so they get less frustrated. We know the signs for ‘milk’, ‘mama’, ‘dada’, ‘food’ and ‘drink’ and just need to repeatedly practice them so he hopefully picks them up.

I’m over the moon with how well he’s doing considering he was early and then had his heard defect to get through. Such a little warrior! 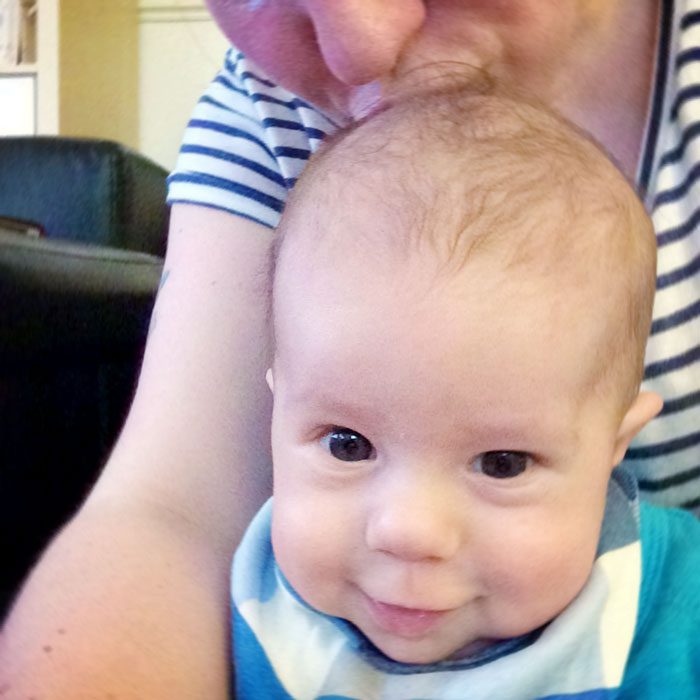 My Mam has been helping me out on Tuesday’s so I can do some work. I guess a big downside of running your own business is that you can never really step away from it, as well as the fact that statutory maternity pay is crap. It actually hasn’t been bad, my Mam comes to my house so I can feed him between clients and community group sessions. It helps that I love the work I’m doing! Of course running your own business from home is great, but that doesn’t mean I can take care of Finley and work at the same time. It just does not happen! Right now I’m getting in lots of freelance work and I can’t afford to turn that down, so most weekends are spent working while James spends time with Finley. It is hard, but I’m so much less stressed, more patient, and I enjoy Finley more, when I accept I can’t get work done most week days for now. In March he’ll be starting one day at nursery when he is 6 months old. I’m equally dreading it and looking forward to it. I saw the nursery when I was pregnant and loved it as it does things like baby yoga and I know he’ll be well looked after, as well as enjoy himself while he is there. But I’ll miss him like crazy. Eventually the plan is that he’ll be with my Mam one day a week and nursery two days a week. I think that should give us a good balance so I can get my weekends back. I’m also looking at how I manage my business so I can achieve a better balance by considering some outsourcing. 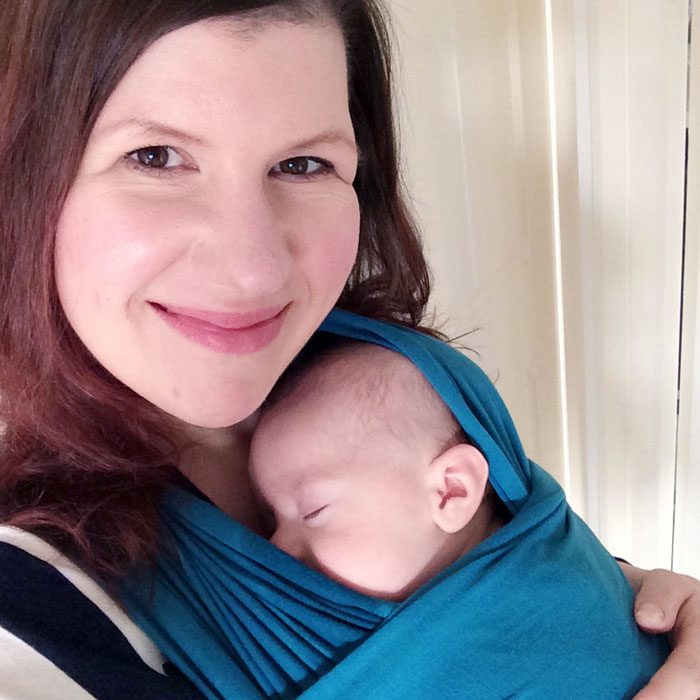 Sleep is a funny one. We have good nights and bad nights, as I think all parents do, for example at the start of the week he had a night of 3-4.5 hour sleeps, where as the night before last he was up every hour! I know we have an issue with sleep association as Finley likes to be held as well as sucking himself to sleep on me or a dummy (although he’s starting to not want the dummy now). Generally when he’s not being held he’ll go 2-3 hours, and tends to go longer when he rolls himself on to his side or his front (which freaks me out with the whole back to sleep thing) Our saviour has been the co sleeping cot we DIYed last month, I can almost feed him in my sleep sometimes! Most of the time he falls straight back to sleep after a feed too which helps. We’ve done a lot this month to reduce use of the dummy and increase the time he spends in the cot rather than being held as well as introducing a comforter. His naps aren’t great unless he’s being cuddled or is in the wrap, so again, to try and get him in the cot more he has three of his four naps in the cot and one cuddly nap. My lack of sleep generally comes from my inability to get back to sleep after an awakening where I also need to use the bathroom, so I’m working on reducing the monkey mind chatter that keeps me awake. I’m also going to try and take at least one day time nap with him. As I was saying above, I’ve abandoned the idea of getting any work done during most week days which means I can relax a lot more. As we are trying to get him more used to the cot, we did stop James taking him for those first few hours on an evening which meant I was getting less sleep, and boy could I feel it! I’m less patient and I have a much bigger appetite when I’m knackered. After that experiment, we decided to wing it so when I feel the tiredness creeping back up, he has a stretch with James so I can recharge. One of my favourite things is when he wakes up in the morning and comes into my part of the bed under the duvets with me. He cuddles right up and I can see his big smile in the dark, it just melts my heart and makes every night wake up worth it.

James and I have talked a lot about the sleep situation, but generally it’s not negatively affecting us or Finley that much. We realise that co sleeping babies wake more often, but I’m happy to go with that in exchange for the closeness I feel sleeping right up next to him. Most nights he rolls himself right up against me, it’s adorable. I know that one day in the not so distant future I’ll wish for these days back, so for now, I’m going to enjoy every cuddle I can get!

Now that we are well out of the ‘fourth’ trimester I won’t do any specific baby body updates and instead I’ll share my weight loss / wellbeing journey in my monthly goals posts. Right now I’m feeling really good! I’ve lost 7lbs this month and I’m officially back to what I was before I fell pregnant. I still want to lose a good bit more weight as I had to gain quite a bit past my ‘happy place’ to be able to get preggers.

I’ve said in previous posts, I’ve had some incredibly hard days since Finley was born and I think it’s important to acknowledge that having a baby can be very, very tough. For so long, I felt like I’d lost the old me, and I missed it. I felt guilty for that, even though it didn’t mean that I loved my baby any less. As I said earlier though, now life feels like this new wonderful, joyful, intense but sometimes challenging, normality. I feel like a mother down to my core and I’m so much more confident and intuitive about how I parent. All the sleepless nights, worry, anxiety, tears, all of it, is completely worth it. When I look at him and he smiles at me my heart melts, I can’t believe James and I produced such a beautiful sweet boy.

If you have a little one how did you approach weaning? What are your thoughts on childcare? Have any of you had a baby that preferred to sleep on their tummy?