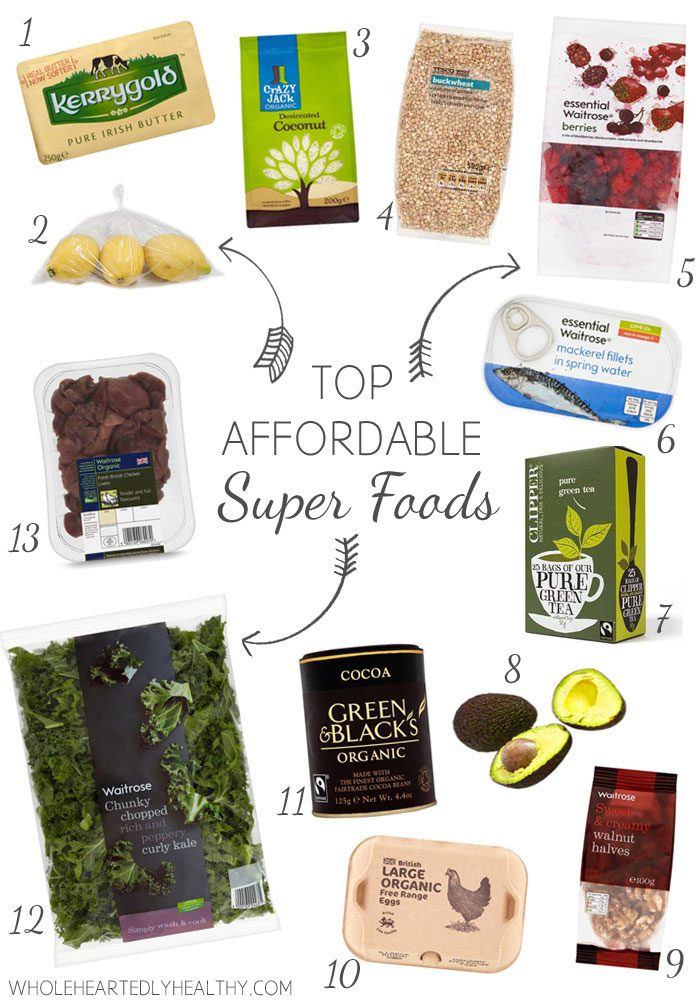 I love a good superfood. The idea that I’m eating something with almost magical properties, which is often how these things are touted, is enticing and alluring. However, I don’t always know how much is hype, good marketing or actual facts, so I’m a lot more wary of things labelled as ‘superfoods’ now than I used to be. I do still love trying out new products, but I’m a lot quicker to honestly access whether or not they do in fact make me feel super! I have my favourites including chia seeds, maca (when I’m not pregnant), coconut oil, coconut water, spirulina and chlorella, but the problem with these are that they generally come with a fairly hefty price tag. I’m the first person to invest in my health when I believe it’s worth it, but it’s good to remind ourselves that all ‘superfoods’ don’t come in posh packaging with a palpation inducing price tag.

So what even makes a food ‘super’? Generally they are foods that have an exceptionally high amount of vitamins, minerals or other compounds that are beneficial and easily assimilated by the body. Many of them are like natural supplements. As I said, not all of them have to be purchased online or from a specialist health food shop, and some of the most effective ‘superfoods’ can be found at a much more affordable price in our own local supermarkets. Here are my favourite affordable superfoods:

I’m bloody addicted to this at the moment! Butter may not seem like a superfood choice, but good quality grass fed butter like Kerrygold is packed with nutrients. Saturated fat is no longer vilified as it once was and some research has shown it can actually help raise levels of HDL (the good) cholesterol (source). It also has good levels of CLA and a better omega 3 to omega 6 fat ratio as too much omega 6 has been linked to inflammation. Butter is also a great source of vitamin K2, and often missing and overlooked nutrient that has a number of benefits.

Ah the simple lemon, we all know it’s great for adding to warm water in the morning for a metabolic kickstart and it’s detoxifying and cleansing effects. Although lemon is acidic, once ingested and assimilated by the body it has an alkalising effect, which is a good thing. I did a little more research on lemons especially with regards to your teeth, and apparently having a little squeeze in warm water each morning should not be an issue, although you can drink it through a straw if you’d prefer.

You don’t have to purchase expensive coconut water or coconut oil to get the benefits of coconut. Plain unsweetened and unsulpured desiccated or shredded coconut is also a great source of those healthy medium chain fatty acids which have been shown to support weight loss as well as having anti bacterial properties.

I have been on my little buckwheat kick recently but for good reason, this gluten free grain is definitely a superfood! You can get it from Tesco for £1.90 for 500g so it’s a reasonably cheap and versatile ingredient. It’s a great source of a range of minerals including magnesium. It’s particular benefits for the cardio vascular system come from a compound called Rutin which is a bioflavonoid with antioxidant abilities which have been shown to improve circulation and vascular health. When soaked and partially sprouted, it’s quite easy to digest too. Not sure how to eat it? Check out my Blueberry, feta and buckwheat salad with orange dressing or coconut buckwheat with chia cherry jam recipes. You can also purchase buckwheat flour which works well in pancakes.

Some of the most antioxidant packed fruit, berries don’t have to be fresh to be healthy, and frozen can often make them more affordable. Antioxidants which are basically vitamins such as A, C and E, or compounds of them. These vitamins are especially useful in supporting the body to deal with free radicals which are cells damaged through oxidation. They can help protect against a range of diseases as well as supporting your skin, hair and nails to age better. Berries made my list, but any colourful fruit and vegetables are great sources.

Salmon is often the go to fatty fish for Omega 3’s but mackerel is a great alternative. When purchased tinned, it’s super cheap and tasty as well as being convenient. I love to eat mine in salads with beetroot which could easily have made this list as well. Omega 3 has been linked to numerous positive health benefits and due to the amount of omega 6 in the modern diet from vegetable sources, many of us will have an imbalance in these essential fats that can lead to inflammation. Mackerel in the UK is also not at as high a risk of mercury contamination as that which is sold in the states which is another positive (a titbit I picked up researching my pregnancy diet) So if you aren’t veggie or vegan, eat your mackerel!

Another antioxidant packed ‘food’, research has shown that green tea can support the metabolism, lower risk of cancers, help the body burn fat and reduce the risk of cardiovascular disease (source).

Avocados are just wonderful! A great source of heart and skin healthy vitamin E and monounsaturated oleic acid as well as being high in potassium (more than twice that in a banana). They are also high in lutein, a carotenoid that works as an antioxidant and helps protect against eye disease.

Walnuts have been shown to be one of the healthiest nuts with the highest levels of antioxidants. They also contain more omega 3 than other nuts so are particularly good for vegetarians and vegans.

Eggs are awesome as long as you eat the whole egg! With plenty of healthy fats, protein and compounds such as choline which has a role in brain development (one reason why I’ve been trying to eat lots of eggs while pregnant). Organic eggs are also higher in omega 3, but at a minimum it’s worth getting free range ones.

It might not be raw cacao powder, but regular cocoa powder still contains a shit tonne of antioxidants as well as tasting damn good! Mix with a little honey (another near contender for this list) and some water to make a rich chocolate sauce.

What kind of super food list would be missing kale? It’s a kind of obvious one but for good reason. Full of beta carotene the pre cursor to vitamin A, vitamins C and K it’s also high in fibre which binds bile acids and helps lower blood cholesterol levels and reduce the risk of heart disease, especially when kale is cooked instead of raw.

This one might be a bit of a leap for some of you but liver is a real super food and extremely good for you. You might as well get organic as that is still cheap and then you know you are getting the best quality. Liver is rich in pre formed vitamin A. I decided to air on the side of caution while I’ve been pregnant, although I don’t really think it’s that much of an issue, however I’ll definitely be adding a little liver to my beef dishes after the baby has been born for an added nutrient boost.

Nothing on that list is over £5, most of them are more around £2 or less. They aren’t super low budget friendly, but in comparison to other super foods they are vastly cheaper.

Do you believe in the concept of superfoods? Do you eat any of these foods on a regular basis? Which cheap and cheerful foods would make your list?